Among the most important accessories that complement a photographer, tripods can easily top the list. Practical and light, they help to achieve better shots and maintain the stability of the photo regardless of height, distance or angle.

In that sense, MeFOTO RoadTrip has introduced to the market as one of the most optimal options thanks to its ergonomics, design, and quality. In addition, some editions covered with leather offer elegance and sophistication-improper characteristics of these tools; however, whether aluminum or carbon, the structure of the MeFOTO RoadTrip is similar in any of its versions, with the peculiarity of being -according to the opinion of customers-, better than any Manfrotto on the market.

As far as ergonomics are concerned, the MeFOTO RoadTrip is made with an integrated head to the spine of the tripod; this, being rotating, allows three functions that are essential for capturing images: friction, drag, and pan control. Also, this part of the tripod can be set depending on the type of photo the photographer intends to capture.

Whether for amateurs or professionals in the field of the image, a tripod is useful no matter what. The MeFOTO, in that sense, is armed with the following characteristics to offer its owners a unique and satisfactory experience. For latest tripods join Tripods For Dslr.

Want to skip ahead to a particular section?

When unpacking this item, buyers will find, first of all, a shoulder strap case, with zipper pockets on the inside that includes an Allen key and a set of clamped feet.

Logically, the highlight during unboxing is the tripod itself, made of aluminum or carbon -according to the model ordered by customers-, and with the typical visual characteristics of this brand. To this is added a spherical head of double action and a plate of the brand Arca-Swiss for a quick release.

Finally, the package includes an instruction manual that guides from how the tripod is assembled to the indications to turn it into a monopod. This, for the grace of many, is translated into a couple of languages.

Features Which In All MeFOTO Tripods

Most MeFOTO tripods manage to stretch around one meter and fifty centimeters, with an extended column and everything. They resist devices of up to 10 kilograms and reach a minimum height of one meter – with the column extended.

Without this part of the tripod, that is, without the legs of height, the MeFOTO retracts up to 30 centimeters, contrasting powerfully with its constitution when it becomes a monopod because it rises 162 centimeters.

As for the weight of the tripod, it is characterized by being light. Generally, it’s around three pounds or a kilo and a half. Leg sections are divided into 5, has a twist lock, two locking positions on the leg and a tilt range of -45 to 90 degrees.

MeFOTO RoadTrip provides its customers with two types of feet for their tripods: the rubber ones, which are included directly in the box and a set of metal supports that include nails and clamps. The great advantage of this tool is that the client can adapt the legs according to the surface in which they are.

For arid places, it is recommended to use metal supports, while rubber ones are adapted for almost every day scenario. As the RoadTrip is armed with five leg sections and two blocking positions, it is possible to adjust it to the height, which is perfect for uneven terrain – rocks, sand or macro shots.

Another aspect that should be highlighted from the legs of the MeFOTO RoadTrip is that they require turning in a clockwise direction. This has a purpose that is reduced to free movement. Thus, owners can adjust it to the preferred height and configuration. When flipped in the opposite direction, the legs of the tripod are automatically locked.

The fact that the block of the legs is performed so simply, occurs thanks to MeFOTO uses a system of folding legs back, reflected in the compact. The legs, in short, are easy to manipulate and operate. It also has an advantage over the competition to become a monopod.

How to Configure Tripod to Monopod?

In the lower part of the hook, there is a hook. What the owners should do is unscrew it, remove the middle column by turning half of the locking ring, and then unscrew the structure until a handle is obtained-from where the tripod is held. Finally, all that remains is to screw the central column. Simple and practical

This part is a fundamental part of tripods. The MeFOTO RoadTrip, in that sense, plays a spectacular role that is reflected in the firmness and firmness with which it works. It does not matter if there are winds oscillating at 5 or 10 knots, if the climatic conditions are the least favorable or if the context is, in short, disastrous, the tripod is responsible for helping with the shot yes or yes.

The concerns in the catches where the tripod is extended all that it gives, the customers discovered that it does not get disoriented. In fact, the central column resists stoically the weight of the camera. The classic range of MeFOTO products is assembled with a groove that spans the entire column, adding strength and rigidity.

Finally, in the lower part of the tripod, there is a hook with spring that allows adding additional weight. Thus, in blizzards, it is just as possible to stabilize the shot.

Center or body of the tripod

Generally, this part of the MeFOTO RoadTrip is made of magnesium alloy, making it visually pleasing and comfortable to grip. The leg loops work without complication and, when disconnected, allow the rest of the tripod – usually made of aluminum – to be placed in position.

Also, the body of the body and the column work optimally together. Therefore, either using the RoadTrip in a quick work of assembly and disassembly, both components are extended and shrink with the help of the Allen key included.

In these tripods, the rotating head operates in three ways: with a locking knob, a drag, and a locking head. However, each one is characterized in its own way.

The fastening of each knob is useful and comfortable. Also, and because of the folds, prevents fingers from sliding during the action. The drag control, meanwhile, allows you to adjust and lock the tripod manually. Thus, it is possible to capture panoramas with the assurance that the head moves freely but stops with the locking of the head.

Regarding the mounting platform, the MeFOTO RoadTrip works with a standard Arca Swiss plate, and with a uniform release locking knob. This plate, screwed, allows them to settle correctly. 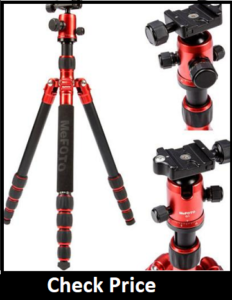 One of the best options in travel tripods is this model made of titanium and aluminum, which is characterized by being compact and resistant. It offers support, flexibility and an extension that exceeds one and a half meters.

In the same way, collateral qualities of this model are their padded leg with foam that adheres perfectly to the central column and thus becomes a functional monopod.

The legs of the tripod extend independently, with two positional angles attached to a spring-loaded hook located in a hollow of the lower end, in the spine. This allows hanging a weigher object to obtain extra stability.

Likewise, the rotating head offers separate blocks and a continuous rotation index that reaches 360º. A quick release plate, compatible with regular screws, is also included in the tripod kit.

To achieve greater flexibility in the action, the legs of the Metrot RoadTrip Tripod A1350 can be independently locked in place to two different angles and, which is fundamental for photographers and users, is done with a light transport.

This model is a portable tripod, with five aluminum legs and a ball joint that can reach up to one hundred and fifty-six centimeters in height and, in its minimum range, is reduced to 39 centimeters, giving functionality and versatility to capture photos in different environments.

In that sense, no landscape or object is too difficult to capture, because the angle of inclination, which ranges between -45 and -90 degrees, allows a more than optimal level.

Lightweight but tough, this tripod is, in a nutshell, the improved version of its predecessor, which holds digital cameras and larger still cameras without flinching, includes bag and strap, making it easy to transport.

This product, like all of its range, can be found in carbon or aluminum. However, according to web users, the carbon version is much more functional, flexible and lightweight. But that, not by far, is the only thing that constitutes the A1350Q1T model.

The most important strength of this tripod is its 360-degree sweep, which allows capturing panoramas very easily, accurately and aligned. The legs of this tripod incorporate a special grip that allows recording on irregular surfaces, or at ground level.

It is also armed with a recessed Spring Loaded gantry located in the central column, resisting an additional weight and increasing the stability of the tripod. Its release plate makes it compatible with the Arca Swiss and its integral level bubble allows you to configure the tripod so that it does not slide in irregular areas.

Like most MeFOTO models, this version divides the leg into five for versatility and functionality.

All MeFOTO RoadTrip models converge on one feature: functionality. For travelers and fans of extreme sports, lightweight and adaptable tools are the ideal complement and this is exactly what this tripod offers.

No matter which model or version is selected, the brand has shown that it is capable of surpassing itself with increasingly modern and innovative models.